Eight years after their paths first crossed, their love story o-fish-ally began with a swipe on a photo!
Continue

A Williamsport Wedding Videographer's Look Into Their Love Story

Show Some Love For Dava & Brady

Many people discover when reflecting on their past that they have crossed paths with their soulmate at least once without even realizing it. This was exactly the story for Dava and Brady as their paths first crossed in 2009 during a random meeting when he took her friend to a homecoming dance. During this brief interaction neither of them could have imagine the beautiful love story that was about to unfold just a few years down the road. Fast forward to 2017 Dava and Brady found themselves single and freshly out of long-term relationships. They felt compelled to rejoin the dating scene, yet still healing from previous relationships they were seeking casual, fun dating rather than a serious commitment. This led to both reactivating their dating profiles on the popular dating app, Tinder.

About a month later, fate intervened, and Tinder introduced their profiles to each other. With a swipe to the right, they were matched, and the conversation began. Dava admitted that initially she did not recall swiping Brady. However, upon receiving the notification that they had been matched she quickly remembered thinking to herself, “His booty looked good in his fishing pictures.” Brady was the first to make a move and immediately messaged Dava to ask if she had gone to Urbana High School. Dava was a bit nervous to say “yes” wondering why he had asked such a specific question. After answering Brady’s question, he then asked if she had played softball. She again answered “yes.” Suddenly the puzzle pieces started clicking together, and Brady reminded her of how they had once met years ago. Dava was very relieved to find she had been matched with a secret admirer and not a stalker! They quickly exchanged phone numbers and began texting one another. Without a hesitation, Brady asked her to dinner the very next night. After their first date, they were inseparable and ended up spending the next week together. The rest is history!

When we asked Dava and Brady how they knew marriage was the next chapter in their love story, they had beautiful and kind words to share about finding forever in each other.

A note from Dava:

“I knew right away Brady was the person I wanted to marry. I had never clicked with anyone on that level. In 2018, we found out I was pregnant and honestly, I was terrified to embark on a journey with someone I had only seriously known for a little bit of time. When I broke the news to Brady, he was so calm and collected and made me feel secure, which at that time in my life I was desperately searching for. I knew once again he was meant for me. And what really finalized my reasonings for wanting to marry him is when we had our son. I had a very traumatic birth story. The way Brady cared for me and cared for our son, Grayson when I couldn’t made me fall in love with him all over again. Brady still to this day makes me feel whole. Brady has helped me on a journey of self-love and worth. He has made it okay to be myself for the first time in my life. Brady has showed me the meaning of unconditional love.”

A note from Brady:

“Dava is a the most caring woman I know. She is the first and only woman that loves me unconditionally. Through all the challenges we have gone through she has stood strong by my side. During these times she is my rock and my hope. She is my everything. She only thinks of other people and never herself. She is a superwoman, and literally never stops! She is always keeping me on my toes and making life more exciting by planning things. For example, she plans way too many house projects…but if she is by my side that is all I want to do for the rest of my life. It makes me so happy. She is the most amazing woman, and I can’t wait to spend my life with her.”

In their free time, Dava and Brady love to spend time and make memories with their son. Another favorite activity they have in common is falling sleep during movies. You can also find this adorable couple watching Netflix and ordering take out, working on house projects together, and adventuring to weekend getaways, specifically glamping.

The three values Dava and Brady have built their beautiful relationship on are commitment, respect, and communication. They value commitment to each other and to their adorable son, Grayson. They also recognize the important of always having respect for each other in both the good times and even during the hard times and disagreements. Dava and Brady share the importance of strong communication skills, and the ability to be open and vulnerable with each other.

Our Western Maryland Bed and Breakfast is nestled in the quaint rolling hills of Western Maryland. The Inn is near the National C&O Canal Park on the Potomac River as well as near the location of the Battle of Antietam.
See OUr Full Review 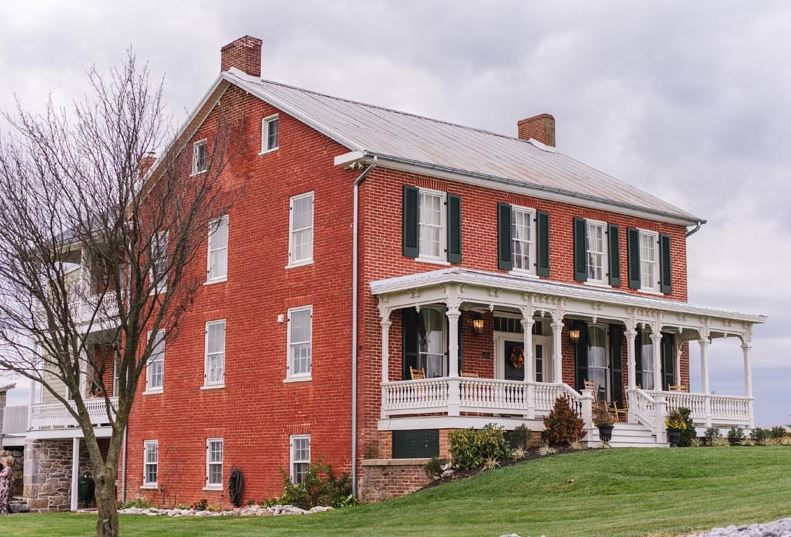