Their relationship has all of the ingredients needed to prove these two are simply meant-to-bee!
Continue

A Myersville Wedding Videographer's Look Into Their Love Story

Show Some Love For Giovanna & Kevin

Giovanna and Kevin’s love story began thanks to the modern matchmaking world we live in – the popular dating app, Bumble! Both happened to make profiles with the hope that Bumble would match them with someone local, hard-working, and driven. They had never expected to not only find someone with all these qualities, but to find “the one” thanks to a dating app, but the rest is history! After matching and Giovanna sending the first message (as the app’s rules state), their conversation sparked. However, Kevin waited 2 months to finally meet Giovanna in person. As he jokes, “You never know who you will meet online. I had to make sure she wouldn’t kill me.” Giovanna was almost ready to give up on the idea that they would meet in person, but thankfully, Kevin finally invited her over to cook her dinner. There was a twist though. Giovanna had to buy half the ingredients because Kevin admitted to her that he didn’t know where they would be in the grocery store. From the beginning, they were already proving that they not only shared things in common but perfectly balanced one another. From that night on, they continued to hang out and cook together. The more time they spent together, they began to slowly realize that this was going to be way more than just dating. Giovanna and Kevin had found their forever.

When we asked this couple when they knew marriage was the next chapter in their love story Kevin shared, “I think we both slowly realized as the months passed, it was meant to be. We both get along perfectly with each other’s families. We bring out the best in each other and still have never had an argument. Sounds cheesy, but we can’t imagine life without each other. We are each other’s best friends. When we talk about our future, we see eye to eye on almost everything. Getting married means we get to go through life with our best friend by our side and make the easy and tough decisions together.”

In their free time, Giovanna and Kevin enjoy going on adventures together whether they are hiking, backpacking, or shooting guns. They stay active by going on runs and working out together. Another one of their favorite things to do is spend time with each other’s friends and families. This couple also likes to spend time in the kitchen cooking and baking followed by watching their favorite movies and tv shows.

Above everything else, Giovanna and Kevin value their family, communication and trust, and self-improvement. Both come from large, close families, and being that they live local to most of them, they like to spend as much time as possible with all of them. Communication to Giovanna and Kevin means putting each other in the other person’s shoes and seeing things from the other’s perspective before speaking about certain topics. This is the biggest reason they never have arguments. They also always give each other the benefit of the doubt. Self-improvement is important to this couple as they are both extremely hard-working individuals that strive to be successful in their careers.

Catoctin Hall at Musket Ridge is the perfect location for your special day. We are delighted to host wedding ceremonies as well as receptions and give you memories to treasure forever. We are proud to be the first zero food waste venue in the United States which helps you lessen the environmental impact of your wedding.
See OUr Full Review 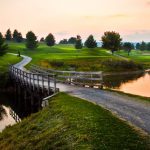