A Berryville Wedding Photographer's Look Into Their Love Story

Show Some Love For Jaclyn & John

What brought you two together?

We both joined a kickball league where he knew everyone for the most part, and I did not really know anyone. When we first saw each other, John would tell his friend how pretty i was and i would tell my friend how handsome he was. We both didn’t think we had a great chance with each other so we did not pursue anything until one day at kickball practice we started joking around and flirting. After that night, we both thought the other could be interested but we were unsure.

We started hanging out as friends. We both were still skeptical of the others interest until one night he asked me to a pool hangout with some of his friends. That night we kissed and it was literal fireworks, something you think is not actually real until you experience it.

After the kiss we could not stop talking about it or each other. But we did not communicate our feelings with each other very well. Signals were confusing and it took a little time to get back on track, but soon enough John asked me to hangout again, we went to the bars with some friends and from there things started to spice up again. We were talking for about a month before John asked me out on 29 Sep, 2019 and we have loved and learned about each other ever sense. On 8 April, 2022 John asked me to marry him in Colorado Springs, CO and i was in complete shock and I was even lost while he was on his knee waiting for me to realize what was going on. This was the best day ever and it was such an amazing way to start our forever journey, taking us back to the start where we knew we were meant to be, our first kiss.

Why did you decide to get married?

We decided to get married because life is easier together. Our differences are complimentary to each other and even on the bad days we never fail to make each other smile.

What are your top 5 things to do together:

Experience the charm and breathtaking beauty of a waterfront wedding at Kurtz’s Beach in Pasadena, Maryland. If spectacular views of the Chesapeake Bay are at the top of your wedding-day wish list, then this venue is a must-see. Landscaped grounds and beautiful gardens offer exquisite photo opportunities, while the gentle breeze of the water and salty air remind guests of coastal charm. This hidden gem in the Chesapeake region is the ultimate unique experience for couples looking to create a waterfront destination feel for their special day.
See OUr Full Review 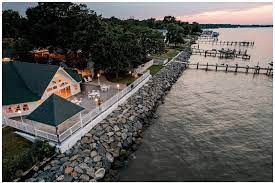